“O Come Let Us Adore Him”
The importance of the Old Testament in this first book of the New Testament is almost impossible to overemphasize. As we read together you will be encouraged either to remember some of the stories that serve as the foundation of our faith, or perhaps to discover these rich episodes in the history of Israel for your very first time.

The second chapter of Matthew provides just such an opportunity.

I think it goes without saying that Matthew has a lot to say in the second chapter of his gospel. Lest we become disheartened because some of these details escape our attention, do not be discouraged. The wise men that came from the East knew none of this information, and yet it did not keep them from doing the one thing God desires of everyone who meets his beloved Son. They bowed down in worship. Here we are in June, and yet it is never out of season to sing the familiar carol, “O come let us adore him, Christ the Lord.” 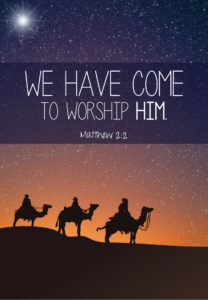 Commentary:
According to Martin Luther “The wise men here teach us the true faith. After they heard the sermon and the word of the prophet they were not slow to believe, in spite of obstacles and difficulties. First they came to Jerusalem, the capitol, and did not find him, the star also disappearing. (It would have been easy for them to say) Alas, we have traveled so far in vain, the star has misled us, it was a phantom…Yet when the wise men had overcome their temptation (to doubt and give up) they were born again by the great joy and took no offense at Christ…For although they enter a lowly hut and find a poor young wife with a poor little child, and find less of royal appearance than the homes of their own servants, they are not led astray. But in a great, strong, living faith they…treat the child as a king.” (Sermons of Martin Luther, Volumes 1-2, “Epiphany, p. 363)