“One, two, three”
In the space of just 20 verses our Lord will teach us much about heavenly number theory.

“Who is the greatest in the kingdom of heaven?”

What follows is a story about one…one lost sheep.

It turns out this is not just a heavenly number theory. This is not merely theoretical. This is practical. Jesus really does want his children to learn these numbers, one, two, three. These numbers literally count. Together they lay the foundation for Christian community. I guess you could say these numbers add up to a body of believers who love one another as we have been loved by God. 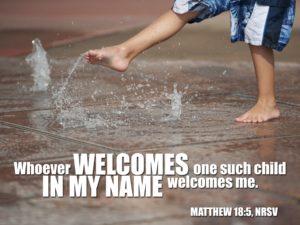 Commentary:
“Matthew goes beyond Mark (Mark 9:33-37) not only by making the child a model of humility but also by urging disciples ‘to become little’, namely, before God. That this requires a turnaround in life is said by Jesus’ words explicitly (‘Unless you turn your lives around…’). According to Jesus not the significant one, the important one, the esteemed one who ‘in the
world’ is considered great, but the little one, the unimpressive one, the one standing in the background and in the shadow of the mighty ones is the person whom Jesus considers great…Jesus wants no Great People in his church; only disciples.” (Dale Bruner, The Churchbook, p. 635)