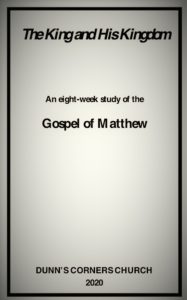 “The people living in darkness”
People living in darkness…that phrase, drawn from the prophet Isaiah, could refer to any people at any time and in any place. In the original context of Isaiah it probably had to do with the terrible ordeal of being attacked and defeated by the Assyrian empire, an attack and defeat that led to exile and loss of sovereignty, not to mention the suffering and devastation associated with war.

People living in darkness…darkness is a miserable aspect of our human condition. Darkness is something we all experience. Darkness for Israel, and darkness for us today, includes large geo-political issues, oppressive regimes, famine, disease, pandemics, injustices and inequalities, and just plain human suffering, things like loneliness and despair.

As human beings we are well acquainted with darkness. Our reading today brings us the good news that the people living in darkness have seen a great light. A light has dawned. That light is Jesus Christ, God’s Beloved Son. Already we have discovered much about Jesus.

Matthew draws on just the opening verses of the prophet’s promises in Isaiah 9, but certainly we are meant to know Jesus is the fulfillment of the whole promise.

“The people walking in darkness have seen a great light; on those living in the land of the shadow of death a light has dawned…

For to us a child is born, to us a son is given, and the government will be upon his shoulders.

He will be called Wonderful Counselor, Mighty God, Everlasting Father, Prince of Peace.

Of the increase of his government and peace there will be no end.

He will reign on David’s throne and over his kingdom, establishing and upholding it with justice and righteousness from that time on and forever.

The zeal of the Lord Almighty will accomplish this.” Isaiah 9:2-7 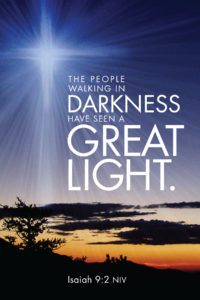 Commentary:
“Here comes the kingdom of heaven!” The word I have rendered ‘here comes,’ has exercised many interpreters. Does it mean the kingdom is near, or does it mean the kingdom is present? Does it suggest a future or a present kingdom? It means both: it is on its ways, it is just about to break in, in fact it is breaking in, in some ways, as Jesus’ very words are spoken—‘here comes!’ The translation ‘here comes’ keeps the kingdom from being a static object either in heaven (is near) or on earth (is here); it protects the kingdom from the desecration of being so present it can be taken for granted and from the irrelevance of being so future it doesn’t matter… ‘Here comes the kingdom’ means the kingdom is breaking in right now through Jesus’ person and Word like a great landslide or like lightning from heaven. The kingdom is vital, alive, moving, and breaking in.” (Dale Bruner, “The Christbook”, p. 123.)