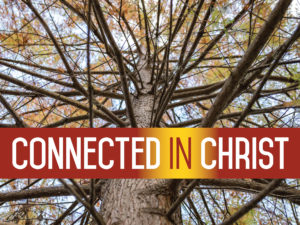 Practicing our faith through the times of the Coronavirus

Each day our Pastor will post a message to keep us connected while the Church is closed.

Although I do not remember exactly where that picture was displayed, my own memory places it hung on a wall or displayed on a shelf in the home we grew up in. If my memory is faulty, which it may well be, and the picture was not in our home growing up, it should have been.

In the summer of 1966 two men met at a YMCA camp. One man was black. One man was white. They developed a friendship that transformed their lives. It also transformed the lives of their children. Interestingly enough the black man was named Mr. Green. His name was Preston Green and he and his family had moved from the deep south, from Louisiana, to a small town in Central California. The white man was named Carl Eberly. Carl Eberly was my dad.

Mr. Green and Mr. Eberly met working as volunteers at a YMCA camp in the summer of 1966. When the pages of the calendar turned to November my dad called up Mr. Green and invited his family to come join the Eberly family for a Thanksgiving meal. Remember, the year was 1966. Remember, racial tensions were high all across our nation. Remember, there were dividing walls of hostility. There was a highway running smack dab through the center of our town. Many of the black families lived on one side and many of the white families lived on the other side of that highway. But that Thanksgiving of 1966 Mr. Preston Green and his family got in their car, crossed that highway, drove down Fitzgerald Lane, and joined our family for a Thanksgiving dinner.

When Thanksgiving rolled around the next year, Mr. Green called and invited the Eberlys to share the Holiday Meal. On Thanksgiving Day of 1967, we crossed that same highway, drove into the Home Garden neighborhood and had Thanksgiving with the Greens. Every year after we would alternate between homes, the Eberlys and the Greens, always sharing Thanksgiving together.

A highlight of the meal was when Mr. Green would make his annual speech. The turkey had been whittled down to just a few bones, the piles of mashed potatoes had been consumed, we had feasted on Mrs. Green’s famous coca-cola jello salad, and so much pumpkin pie had been stuffed in our guts that we were about to explode. It was then that Mr. Green would push back his chair and begin. It was always the same. Speaking to my father, he would say, “Well, Carl, I guess it was back in 1966 that the Eberlys first had the Greens over for Thanksgiving dinner. And every year we have been sharing this fine meal together.” It was so predictable that when my brother and I got to be teenagers, we would have fun and mimic Mr. Green. When he would lean back, so would we. When he would say his speech, our lips would silently mouth the words with him in perfect unison, “Well, Carl, I guess it was back in 1966….”

I will never forget the first Thanksgiving after our oldest son was born. It was 1985. We drove down from Sacramento for Thanksgiving dinner. The Greens were there. We threw the football, we visited, we admired the babies. Then we sat down to eat. We whittled the turkey down to just a few bones. We consumed mounds of mashed potatoes. Mrs. Green’s coca-cola salad was as good as ever. And even though our bellies were full we kept stuffing our faces with pumpkin pie. And then right on cue, at the climactic moment, Mr. Green leaned back in his chair. I knew what was coming. It was so predictable. It was like clockwork. Mr. Green leaned back in his chair…but now I did not lean back and mimic him. Instead I watched with a strange wonder and awe, a profound sense of humility and gratitude. That year when Mr. Green said, “Well, Carl, I guess it was back in1966 that the Eberlys first had the Greens over for Thanksgiving dinner,” I did not joke around at all. Instead I looked at Mr. Green and then I looked at my dad. Without ever making a big deal about it, these two men had helped me to accept people whose skin was a different color than mine. Then I looked at my son, just a baby boy, not even one year old. I said to myself, “I hope that when my son grows up, he will look at me and be able to say ‘my dad taught me how to love and respect people of all races and religions, of all color and creed.’”

In 1966 two men clasped hands. One hand was black. One hand was white. Did they simply clasp hands in friendship, choosing not to let something like the color of their skin come between what proved to be a rich and wonderful relationship that spanned the years? Or did they intend something more, two men of different color purposely choosing to reach out across a racial divide because they believed the world is a better place when people are judged by the content of their character and not by the color of their skin, because they believed that if God’s final intention is that the wolf will lay down with the lamb, then certainly two human beings, both created in the image of God, can join hands even though the color of those hands is dramatically different.

That was back in 1966. If Mr. Green were still alive right now, in the year 2020, I wonder if he might lean back in his chair and say a slightly different Thanksgiving speech. “Well Carl, it was back in 1966 that the Eberlys first had the Greens over for Thanksgiving dinner…and Carl, there is still work to be done.” I’m sure if Mr. Green and Mr. Eberly were watching the nightly news right now, along with concern for the Coronavirus, they would be deeply concerned and deeply disturbed by the horrible images that tell us race still divides.

With the love of Christ,
Wayne

Here are the previous daily readings: